You are worth making a scene over.

I have a girlfriend who has a super specific fitness goal right now:

“Thirty-year-old woman completes one pull-up!” is not likely to become front-page news in her local newspaper.

There’s not going to be a celebratory parade, an award ceremony, or a commemorative plaque set in bronze once she reaches her goal.

It’s not exactly a “glamorous” or “impressive”-sounding goal, like running a marathon or rowing across the Atlantic.

It might be a tiny, insignificant goal, compared to “other people”… but to her?

“One pull-up” represents so much more than having a little more upper body strength.

Pursuing this goal represents devotion (she’s training 5x a week at the gym to strengthen up her biceps) and perseverance (she’s doing it despite recovering from a broken leg) and faith (she doesn’t know if it’s even possible because she’s never been able to do a pull-up in her entire life, but she’s trying anyway).

For her? “One pull-up” is a big effing deal. 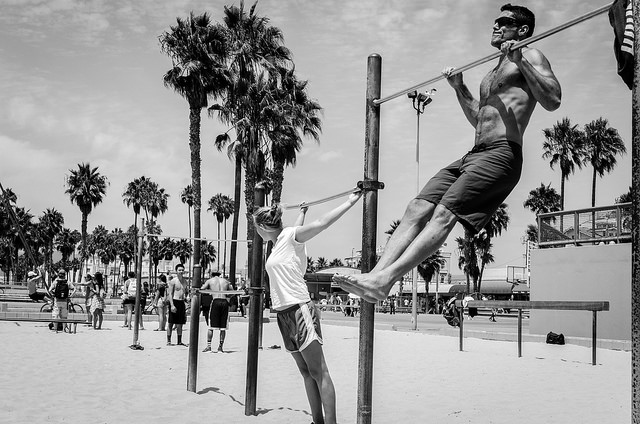 When you commit to a goal with your whole heart — when you are so committed that you are willing to make a daily effort, sweat, grunt, tease the edges of your comfort zone, be a little scared, be emotionally vulnerable, take risks, stand up for what you want with no apologies, and really put yourself out there — that is HOT stuff.

I call it: making a scene.

For you, “making a scene” could mean taking a one night a week to focus on your own personal projects instead of serving everybody else. That subtle scheduling shift could be a radical, world-shifting move for you. Especially if it’s not something you’ve ever, ever allowed yourself to do.

For someone else, “making a scene” could mean quitting a soul-sucking job that feels like an abusive relationship… getting back into the dating world after a five-year hiatus… or re-casting yourself as the heroine of your own story instead of the victim.

“Making a scene” could mean walking for ten minutes a day. Or running thirty miles a week.

It could mean popping the question. Or (finally) filing for a divorce.

It could mean launching a blog. Or marching on Capitol Hill.

We all have a “scene” that we need to make.

A goal, an action step, a choice that’s unnerving, uncomfortable, even downright terrifying — but that deserves our total commitment.

What kind of scene do you need to make?

There’s power in numbers and when we voice our commitments, out loud and proud, we all grow stronger.

Honey, this is your life.

Creating the body, career, relationships and life that you want is worth the courage… and worth the effort.

Your goals are not silly. Your dreams are not stupid. Your contributions are not meaningless. You’re here on this earth and you matter.

If there’s one thing I know for damn sure, it’s this:

You are worth making a scene over.

Heads up: my newest coaching program, Make A Scene, is open for enrollment as of… right now. 6 months. 10 women. One mission: Standing up. Speaking out. Taking brave, unapologetic action to create what we want.

My Make A Scene graduates are making scenes left and right and six ways to Sunday.

I could not be prouder of their progress and I can’t wait to run this program again!

Get the details here.

No hiding. No waiting. No hanging back, hoping someone else will be brave, speak up, or work hard… so that you don’t have to.

You lead the charge. You be the change. THIS is the year. See you in there!