I have a (female) client who discovered that she was earning significantly less than her (male) co-workers. She was annoyed—but not surprised.

She compiled a list of her accomplishments from the last year—all the reasons why she’s a powerful asset to the company. She put together a strong argument for why she ought to get a raise. She scheduled a meeting with her manager. She made her request.

“We can’t do that,” her (male) manager replied. “Sorry, we don’t have room in our budget to raise your salary. So I can’t authorize a raise for you.”

At this point, many people would mumble, “Okay never mind thank you bye…” and slink out of the room, crushed and disappointed. But not my client.

“Oh, you’re not authorized to increase my salary? Well then, I would like to schedule a meeting with your supervisor—or whoever has the authority to raise salaries.”

Those were the magic words. 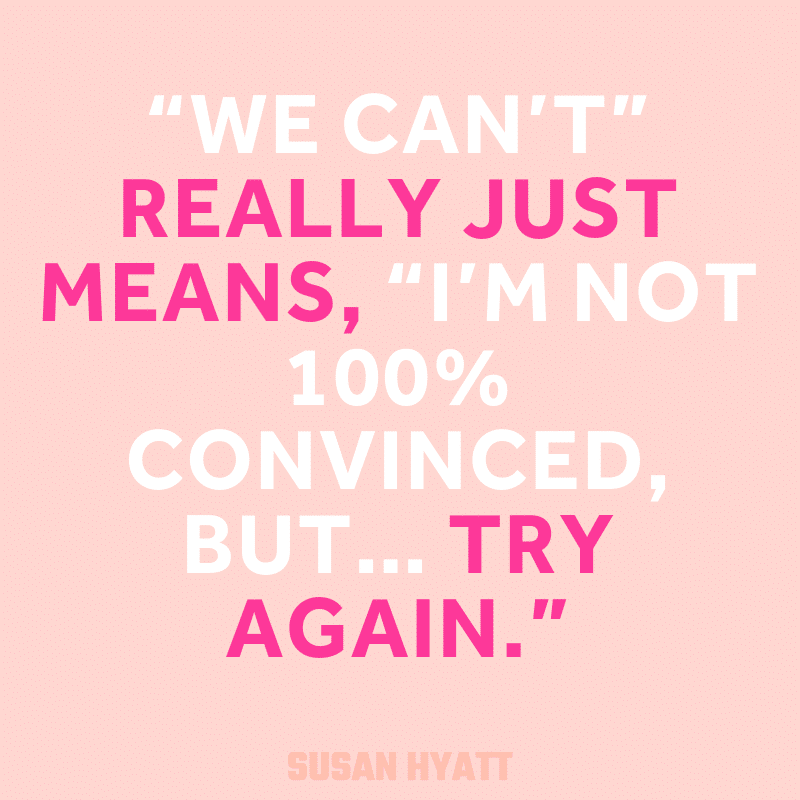 Apparently, her manager didn’t want my client to speak with his supervisor because… who knows why? Maybe because he’d been lying about the budget. Maybe they did have room to give her a raise after all. Maybe because his ego was rattled and he didn’t want to be perceived as a “powerless” man who didn’t have the authority to increase her salary. Who knows what motivated him? The happy news is that… my client’s approach was successful. Shortly thereafter, she got a significant raise.

As she told me this story, I was beaming with pride. She handled a frustrating situation with grace and strength. After hearing “no,” she didn’t give up. She took another angle. And it worked.

When someone says, “We can’t do that,” that’s not the end of the conversation. That’s the beginning of a negotiation.

My literary agent initially told me, “I’m not interested in your book.” I revamped my proposal and tried again. My second pitch led to her saying, “Yes, I’ll represent you.”

I told my teenage son, “There’s no way we’re going on a trip to Thailand in the middle of the school year so that you can study martial arts.” He kept trying—relentlessly reminding me about all the reasons why this would be a life-changing trip for both of us. Eventually, I agreed. And you know what? He was right.

That second, third, fourth, or fifth try could change your income, your career, your future, the whole course of your life.

PS. I have two bedrooms remaining at my Italy Retreat happening June 8-15, 2019. Have you been thinking about joining me? Click here for all the glorious details!