You know that one idea that keeps popping into your mind… and you briefly think to yourself, “Maybe I should do that!”… except two seconds later you decide, “No, that’s silly, never mind…” and you talk yourself out it?

This is a true story about what happens when you actually follow that crazy little idea… wherever it may lead.

My client Nicole hired me for business coaching. She’s a certified life coach and she enrolled in my Clear Coaches Select program hoping to line up more clients and make more money.

She created an amazing program to help entrepreneurs with branding, but she decided,

“I’m going to take a break from coaching for part of the summer and then re-focus in the fall,” she told me.

She started off the summer working at a restaurant in Cape Cod, earning an insane pile of cash in waitressing tips (but that’s a story for another time!), taking leisurely walks along the beach, and wandering into cute little knick-knack shops.

One day, while browsing through a shop, she noticed a piece of artwork. It was a trio of fish painted on a piece of driftwood. Nothing fancy. Just a very simple painting of three little fishies. For whatever reason, it caught Nicole’s eye.

A few days later, at work, Nicole was telling a coworker about the fish painting. Jokingly, Nicole said how she would love to paint fish onto pieces of wood and go around to festivals and sell artwork from a booth and be barefoot and carefree and kissed by the sun, haha, oh what a life that would be! Another coworker overheard the conversation and told Nicole, “Well, if you’re serious about this, I’ve got eight bags of wooden shingles siting in my yard. So if you want to start painting fish on pieces of wood… you can have the shingles.”

Nicole wasn’t really serious. She was mostly joking about the whole thing. She never really considered herself to be an “artist,” not really! And yet…

“I’ll take the shingles!” she said.

Later, Nicole picked up one of the wooden shingles—the kind of shingle you’d typically find on the roof of a house in Cape Cod—and she turned it over in her hands. She admired the rustic, slightly worn out, vintage appearance of the wood. It was like a blank canvas. She bought some paint and brushes. She painted her first little fish. And then another. And another. She kept going. 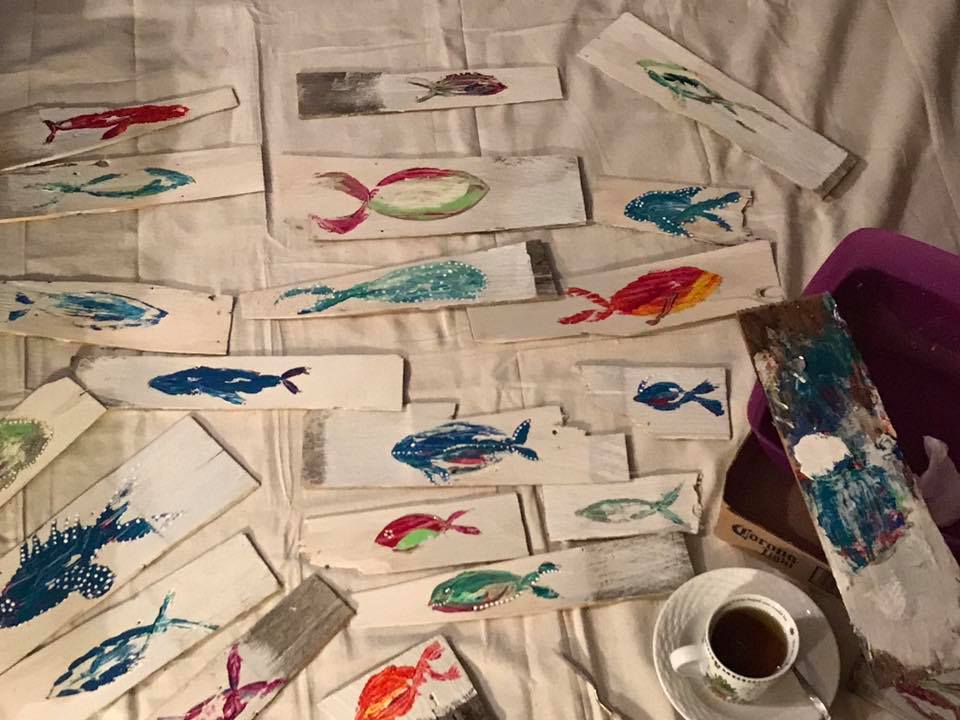 Within just a few weeks, Nicole started selling her creations—she calls them Shingle Fish—to local gift shops. The residents—and tourists—of Cape Cod have gone wild for Shingle Fish. The project has taken on a life of its own! Already, Nicole is getting orders through social media—people contact her through Instagram and Facebook—and she’s showcasing her Shingle Fish at two festivals this fall, and she recently had her Shingle Fish featured inside a local restaurant, too.

We caught up on the phone recently. Nicole was giddy with excitement. She felt so excited about this project, and she told me, “All the marketing strategies I learned from you during Clear Coaches, I’m taking all of that information and I’m using it… except rather than focusing on a coaching business, I’m applying all the stuff I learned to my new Shingle Fish business instead!”

Moral of the story:

Listen to those crazy little flashes inside your head… and follow them… because you never know what might happen next.

The next time it happens… follow that crazy little fish as it darts through your brain. Don’t let it escape. Swim after it and catch it and then act on it. Don’t overthink it. Don’t talk yourself out of it. Just grab the damn shingle and throw some paint on it.

Who knows where that little fishie might take you?