Silence is not an option.

On Sunday, May 31st, I was fired by a 1:1 client who stated that my posts of support to fellow black people were creating an unsafe space for her… A white woman.

Time and again, black people have been dehumanized, stripped of their basic human rights, racially profiled, and to this day are continuously subjected to the fall out of the hurt and pain our ancestors created.

So I’m not sorry to say:

We should be ashamed.

We should be uncomfortable.

We should be absolutely disgusted.

Because feeling these ways mean that we recognize the injustices throughout history and emphasize the blatant fact that we have been conditioned to believe that our whiteness makes us inherently more superior. 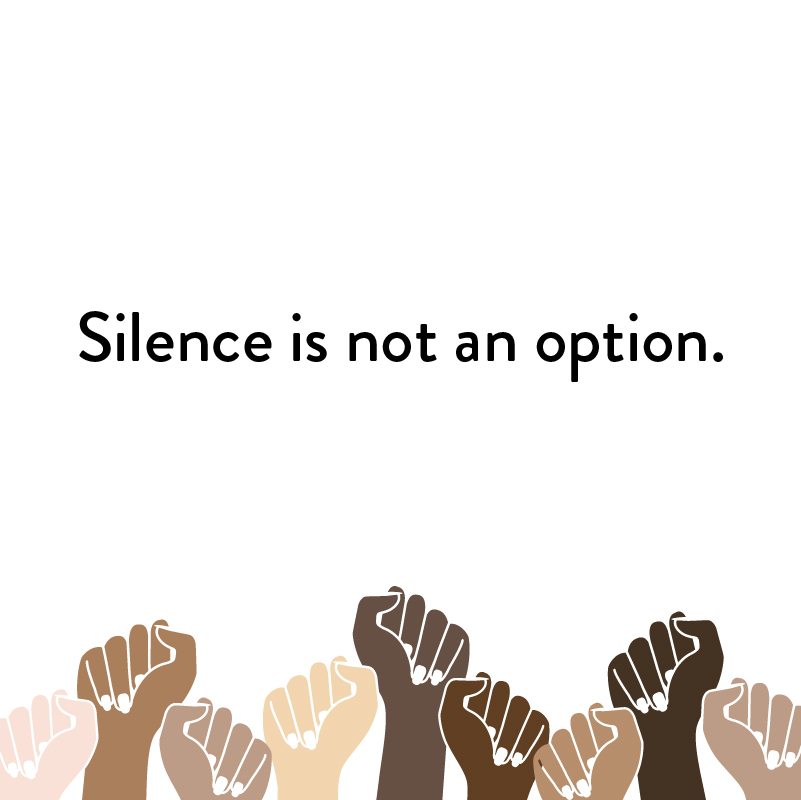 Last Friday, I made a post in support of black people on social media because silence is not an option.

Your skin color should not define if you are afforded the most basic of human rights.

Recognizing the privileges that we are afforded is important.

Pay attention to the way people in power are inciting racism rather than acknowledging a history littered with injustice and frustration that is millennials old.

Pay attention to how those with privilege are speaking today.

Pay attention to your own personal privilege. Is your voice being heard? Are your actions aligning? Are you practicing empathy and respect in a time where millions live in fear?

Pay attention to what is happening in the world right now and respect that what has brought us to this point— as a nation and as human beings deserving of equal rights— will not go away without you.

This post was widely recognized and elicited comments of support, pledges to do better, and healthy conversations… Including this comment from a black woman:

Thanks for posting this. It’s amazing how different this narrative sounds to our mutual friends coming out of your mouth than mine. That there shows one of the many privileges.

As a white woman striving to do better, I cannot tell you how broken I felt in that moment. In my efforts to strive to do better and vocalize my support for others– I witnessed the advantages of my privilege outshining the voice of those experiencing pain firsthand.

My voice was listened to infinitely more than that of hers.

My voice was listened to infinitely more than George Floyd– an unarmed black man pinned to the street, hands cuffed, unarmed, who plead with his dying breath:

“Please, the knee in my neck.”

“My stomach hurts, my neck hurts, everything hurts.”

So to reiterate: It’s time to pay attention and do better.

I want to make it abundantly clear that I am liberal and political. My platform has always been to eliminate diet culture and help women feel strong, confident, and successful.

And it’s my right to emphasize why we should care so deeply about the pain and suffering of black people across our country.

Because we are the problem.

There is no forward until white men and women begin to accept that we have robbed black people of their identity, their freedom, and their basic human rights.

My team and I believe strongly that black lives matter.

We strive to do better and will be sending out an email in the coming day with resources for white entrepreneurs who want to join with us.

Anyone who thinks they don’t need these resources or feels uncomfortable with the idea, stick around… Because you need them now more than ever.

Additional resources you can utilize at this time:

Template For Holding Your Employer Accountable For Racial Justice