RCC 50: How to Stay Optimistic When Others Dismiss Your Ideas

It’s so discouraging when you have an idea you’re really excited about and someone else dismisses it out of hand. It’s hard enough to get up the courage to share our biggest, most innovative ideas with other people – and even harder to hear them laugh about it, or say it’s impossible, or look at you like you’ve got a screw loose.

If you’re a visionary thinker, you need to be ready to trust your instincts and continue to pursue your ideas – even if others don’t get it yet. If you look around you, you’ll find that many of the products, technologies, and ways of doing business that we take for granted today were invented by people who initially were told that they were nuts.

Listen in to this episode for a quick pep talk about trusting your gut and pursuing those big ideas. I’ll tell you how to give yourself and your idea and reality-check before you spend lots of time and money developing this product or service. And we’ll talk about some other visionaries who have helped shape our world – all because they trusted their intuition and made their radical ideas come true.

What You’ll Learn from this Episode:

Listen to the Full Episode:

Featured on the Show:

Welcome to the Rich Coach Club, the podcast that teaches you how to build your dream coaching practice and how to significantly increase your income. If you're a coach and you're determined to start making more money, this show is for you. I'm master certified life coach Susan Hyatt, and I'm psyched for you to join me on this journey.

Hey, ladies. Do you remember a time when you told someone about an exciting idea and they kind of poopooed your idea? Maybe they said, “Well that sounds awfully expensive,” or, “Don’t you think that’s pretty unrealistic?” Or maybe they said, “Why would anyone want to buy that?”

It’s pretty discouraging when you’re excited about something but other people just don’t seem to get it. So on today’s show, we’re going to talk about this and how to keep your excitement and optimism and fire even when other people, even loved ones, dismiss your ideas. Here we go.

As always, we’re starting with a segment that I call your Two-Minute Pep-Talk. And this is the part of the show where I share some motivation and encouragement to get your week started off right. And I try to keep things to two minutes or less.

So, a while back, the actress Diane Keaton made an appearance on the Ellen DeGeneres show and Diane told a hilarious story about how she briefly dated a weird nerdy guy with a lot of strange ideas about computers. And this was many, many years ago.

And so this guy invited Diane out to dinner and during their date, he was gushing with excitement about his work and his dreams and he told Diane he was convinced that one day everyone would have a personal computer in their home. Remember, this was decades ago, long before laptops and emails and smart phones.

And Diane was like, “Uh-huh sure, yeah, if you say so, dude.” And she did not continue to date him. That nerd was Steve Jobs. Decades later, Diane jokingly told Ellen, “I could have been with Steve Jobs, what an idiot I was.”

See, people like Steve Jobs are visionaries. They see possibilities before other people do and when you’re a visionary thinker, you tend to encounter a lot of skepticism and confusion.

Previously, I told the story of a guy who started a company called Edible Arrangements. This guy, Tariq Farid, was a florist. One day, he had a cool idea, why not make beautiful bouquets of flowers except, instead of using flowers, using fruit that people can eat; melon chunks, pineapples, chocolate-dipped strawberries, stuff like that, like an edible bouquet.

And he shared his idea with a few business experts, a small focus group, and they literally laughed in his face, “Stick with flowers,” they told him. He ignored them and followed his instincts and now his company Edible Arrangements is worth $500 million. Nobody’s laughing now.

I often tell my clients, trust your instincts, even when other people poopoo your ideas, even when people laugh in your face. If you have a very strong instinct about something, follow it. Your instincts could be worth millions.

I had a client who had a funny instinct to start painting colorful fish on wooden shingles, just because she had the strong hunch that tourists in her town would love to buy them as souvenirs. And she started making these shingle fish. And in less than a year, she’s got her fish in stores all over town, art fairs, trade shows, and they’re selling like hotcakes. And she’s having so much fun making these fish paintings and she’s generating tons of money from this crazy art project.

Again, trust your instincts. People might be laughing now, but they won’t be laughing later. But you, you’ll be laughing all the way to the bank. Remember, they laughed at Steve Jobs too, pep-talk complete.

So now, we’re moving into the part of the show where I give shout-outs to you; shout-outs to listeners, clients, all the wonderful people in my business community. And today, I want to give a shout-out to somebody whose name online just starts with HSG.  So I’m just going to call you Holly.

So, Holly left me a five-star review on iTunes and she said, “You’re such a breath of real air. Enjoying these podcasts, binge time. The financial one was so amazing. What a great twist to thinking about it. Thanks for all the knowledge, humor, and amazing podcasts. I’m new to you and loving it.”

Well, thank you, Holly. I appreciate that. And hey, if you have something to say about this show, please send an email to my team at support@shyatt.com or post a five-star review on Stitcher, Apple Music, anywhere you listen to podcasts and you might hear your name on a future episode. I love giving shout-outs to you guys so thanks so much for the love and I love you right back.

Alright, peeps, on this episode, we’ve been discussing how to feel confident about your ideas even when other people poopoo them. Because people might be laughing, but maybe you’re the next Steve Jobs of the coaching industry.  Maybe you’re a visionary ahead of your time. Maybe you’ve got a million-dollar idea that people will totally love, they just don’t know it yet. Or maybe you’re delusional. It’s possible you have a visionary genius idea, or it’s possible you’re delusional. How can you know for sure?

Well, there’s no way to know for sure because there’s no way to completely control your life, your future, or the marketplace. Many forces are outside of your control. You can’t predict anything in business with 100% accuracy. But you can follow strong instincts and make a strong educated guess based on strong evidence.

How? Test your idea. If you’ve got a visionary idea, like a product idea or service idea, test it out in the marketplace and see if it has legs. Test it out in a small inexpensive way before you invest tons of energy into fleshing it out fully.

It’s one thing to describe your idea to someone; it’s another thing to actually test it out with real customers and see how your idea performs in the marketplace. Do people love it? Do people talk about it once they’ve tried it? Is buzz building around your idea? Does your idea seem to be growing, attracting a fan base or taking on a life of its own?

These are all good signs that you’ve got an idea that has legs and could grow into something major. So trust your instincts, test your instincts in the marketplace, collect data, gather evidence, and then let evidence drive your next move.

Ignore the haters and naysayers and cynics who aren’t even your dream clients because their opinions really don’t matter. Their opinions are just noise. Turn down the volume on the external noise and turn up the volume on your powerful instincts.

Alright, thank you so much listening to Susan Hyatt's Rich Coach Club. If you enjoyed today's show, please head over to shyattagency.wpengine.com/rich where you'll find a free worksheet with audio called Three Things You Can Do Right Now To Get More Clients. You can download the worksheet and the audio, print it out, there's a fun checklist for you to check off. Just three things to do. Check, check, checkidy-check. 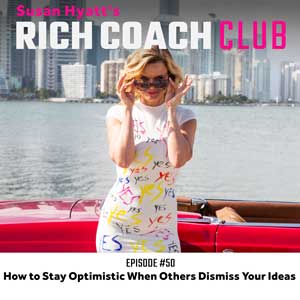 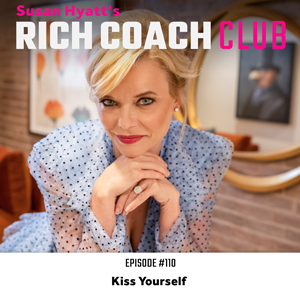 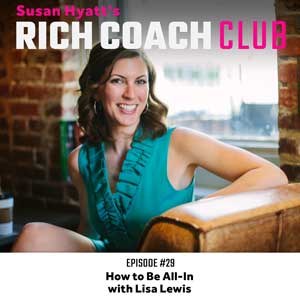 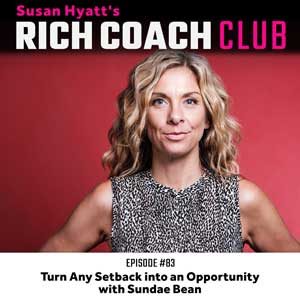